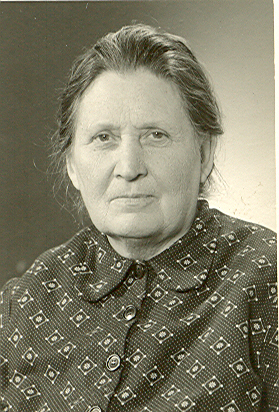 Rosina (Weller) Martin was born in 1892 in her ancestral village of Gnadental, Bessarabia, Russia.  Her ancestors were vintners by trade and were original settlers coming directly from Württenberg, Germany.  She was the youngest of nine children.  After the death of her sister, Margeretha, only 28 years old, she married Theodor Martin and raised his two children and her six children with her husband.  Her husband, Theodor, was raised as an orphan and had only infrequent visits from his grandmother.  He did not know his parents.

Rosina was a quiet person, yet strong in caring for her large family.  She stood by her husband at all times, in spite of the many  hardships they endured, such as her own serious illness in Austria, and all of the illnesses suffered by her children, such as whooping cough and scarlet fever, and also the death of a young son.

She also had a deep abiding faith in the Lord and stood by her husband and children wherever they lived.

She is buried beside her husband in Sindelfingen, Germany.