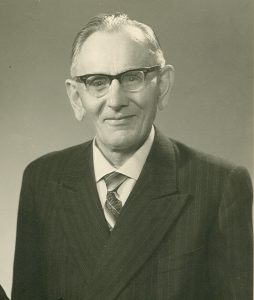 Theodor Martin was born in Neu-Teplitz, Bessarabia, Russia.  The village is rarely mentioned in historical records, and was undoubtedly an extention of the original colony of Teplitz.  Not much is known of his early life as to how he came to Gnadental and married his first wife, Margareta Weller.  She bore him two sons.  After her untimely death, he married her younger sister, Rosina, who raised these children and six more from this marriage.

He was a finish carpenter by trade and produced fine furniture for the residents in the area.  In 1937, however, because of economic hardships, he relocated his entire family to Cobadin, Romania where he continued his trade until he was forced to evacuate to Austria during the war.  With the hardships of the war, he lost his son, Willi, and cared for his children while his wife, Rosina was ill.  Several of his children also were hospitalized for long periods of time.

After the war, he was forced to return to Cobadin, Romania by the Russian forces.  He had worked for them as an interpreter for a time.

In 1960, he was allowed to leave Romania and  live with his son, Herbert until his death in 1972. During this period, he was well know to share his faith in Jesus Christ with as many as would listen to his testimony.